Klezmerduo is considered to be one of the finest interpreters of traditional klezmermusic in Denmark. Music which holds longing and sorrow but at the same time insisting on hope, joy and celebration.

More than 25 years ago Klezmerduo were amongst the first in Denmark to kick-start the revival of the sparkling and life-affirming Jewish folk music of Eastern Europe.

Nowadays they give more than 100 concerts every year in Denmark and abroad, where they have performed in most European countries and in Israel, USA, Argentina and Cuba.
Being rooted in the theatre, storytelling is often a part of the performances in schools, churches, festivals, theatreprojects, at cultural events and private parties. Their performances are often described as full of nerve, vitality and humour.

The musical schooling of Klezmerduo has been forged through years of travelling and performing in Eastern, Central and Western Europe and the Middle East. Playing in the streets, meeting up with musicians, actors and singers.
Both Henrik Bredholt and Ann-Mai-Britt Fjord are autodidact musicians, but have had personal teachers and attended master classes – especially master classes with the famous clarinetist Giora Feidman has been of great importance.

Renewing the tradition Henrik Bredholt has written new klezmertunes, some of them influenced by Danish folk music.

Klezmerduo has appeared in many radio- and TV programmes and won a first price at the Danish World music festival.
They have released 4 CD`s and received several Music Award nominations.

Some references from the press:

"The Klezmermusic in the virtuous arrangements of the duo is full of bubbling vitality and nerve. In this country Klezmerduo is a distinguished representative of international calibre." Ringkøbing Amts Dagblad
" A lively, merry and passionate Jutlandic Jewish Jig. Danish worldmusic of high standards". Jyllands Posten
" The voice of Ann-Mai-Britt Fjord radiates a mixture of joy, defiance and strength. Altogether a very charming music". Politiken
" Tremendous interpreters of the joyous Eastern European Jewish musictradition -
and mind you, they are even "goyim". Dagbladet Information
"Danish Klezmer ...Oy Oy Oy makes you high. If you don't fell like dancing, it will make you". Vendsyssel Tidende 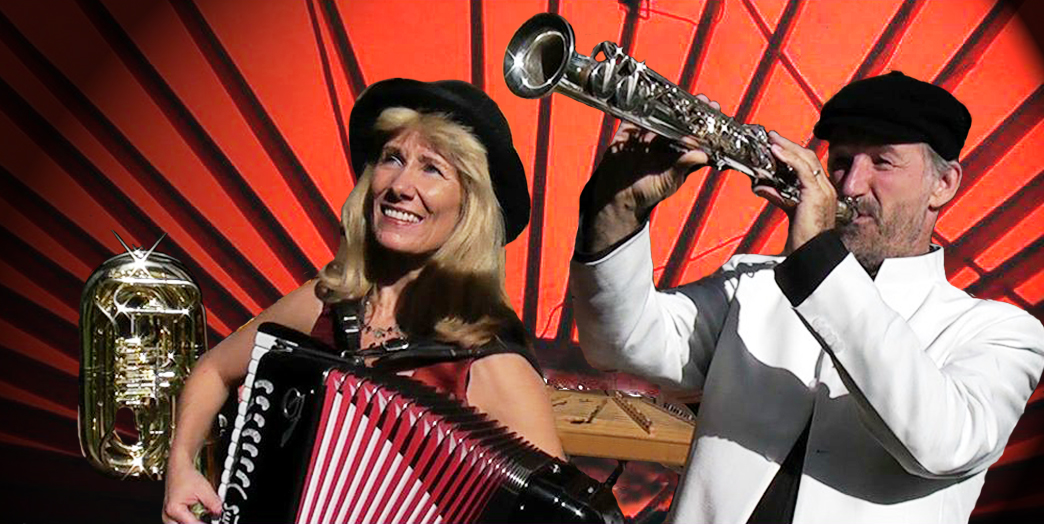 KLEZMERDUO may be called nowadays klezmorim - the Hebrew word for the travelling Jewish folk musicians that enjoyed great popularity in Eastern Europe during the last centuries. The Klezmorim went from village to village, where they played their music at celebrations, especially weddings, in the homes of both Jews and Christians. Their repertoire was wide, covering both religious songs, Yiddish songs, popular tunes classical pieces - and of course dance music – all of it played “mit gefil”.